I have just discovered your site - it is great to read up on so much.

I was at Arusha from 52-56 and was so disappointed when parents moved me to a UK convent at 11 although I finally managed to get to Iringa (St Michael's & St George's).

Memories are limited although I remember Mrs Hampshere teaching me to plait hair in the Brownies, the visit by Princess Margaret and how the tiny (even then) princess walked the whole of the length of the hall to the stage, then later going with the whole school to the parade somewhere in Arusha to see her again.

Also remember receiving the tackie, of course the tortoise, climbing the trees and many days spent in the san with tonsillitus.

Happy days! I remember going around a spagetti factory with a friend whose dad owned it. Not sure now of the name, but would love to make contact.

We revisited Arusha (2004) and stayed at the modernised New Arusha, visited the school (and saw the tortoise), met the Head and a few children. Hope to go back again sometime. Also went to the Anglican church on the Sunday, remember the times we walked there in crocodile fashion?

I have a load of lovely photos of the school, but am not sure if you have a website I could put them on. Would also love to see some of the others that folks have.

The spagetti factory must have been Amekas Macaroni Industry, owned by Mr. Stylianou (see http://www.ntz.info/gen/b00681.html). There appears to have been a Stelio Stylianou in the Kindergarten in 1956 (he won an art prize).

I want to update the web site to make it easier to add photos, meanwhile the best way is to ask you to send them to me. I'd add them as an album in your name, with cross links to wherever is appropriate, depending on how much you tell me about each photo.

Thanks for the recollections

photo of the Cathedral 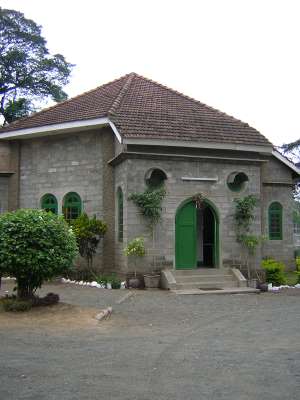 Thanks for getting back to me - I guess we must have met at Arusha sometime. Which house were you in? I was North House, also the motto in my day was 'Manner Maketh Man' and remember seeing it in the dining room for the older kids.

I am attaching a photo of the Cathedral (as it is now) where we used to go. I'll send some more sometime.